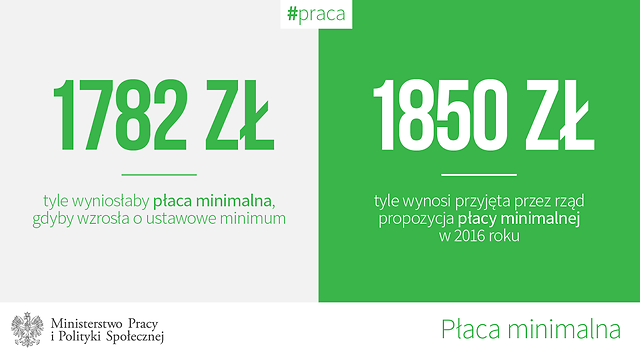 Since January 1, 2016 minimum wage of a full-time employee is 1,850 PLN (gross amount). It is 100 PLN more than last year. Thus, at the moment a take-home pay totals approximately 1,355 PLN. The exception (as in previous years) is remuneration for persons who are starting their employment. In their case, it can not be less than 80% of the minimum wage, which means 1, 480 PLN gross.

It is worth remembering about that so as not to make a mistake, especially when someone hires a new employee, changes employment conditions or pays salaries to current employees. Paying a full-time worker an amount below the minimum wage is a serious violation of the labor code.

The minimum wage is related to many other indicators, for which it is the basis for calculations. With the increase in the minimum wage some benefits for employees, such as night shift supplement or downtime pay, will increase as well.

Changes regarding the minimum wage might be viewed in a negative light by enterprenuers who have just launched their business and who thanks to that are eligible to preferential ZUS (Social Insurance Institution) contributions for the first two years. The rate of social insurance is 30 per cent of the minimum wage.

Offences are also subject to fines which can amount to a maximum of twofold of the minimum wage.

Tax offences, which are more serious, are penalised by courts in the form of the so called multiple of day rates. A day rate may range from a third of a minimum wage up to four hundred fold of the minimum day rate.

All of that is thanks to one regualtion of the Concil of Ministers from Septmeber 11, 2015 concerning the amunt of the minimum wage in 2016 (Journal of Laws: item 1385).

This website uses cookies to improve your experience while you navigate through the website. Out of these, the cookies that are categorized as necessary are stored on your browser as they are essential for the working of basic functionalities of the website. We also use third-party cookies that help us analyze and understand how you use this website. These cookies will be stored in your browser only with your consent. You also have the option to opt-out of these cookies. But opting out of some of these cookies may affect your browsing experience.
SAVE & ACCEPT